In an attempt to get back to reading books over the holidays, I decided to start reading Inferno – the latest novel by Dan Brown (author of the Da Vinci Code). Now before you pass judgement on my choice of author/novel, I was simply looking for a fictional page turner to help me build the momentum I personally need, when I’ve been away from books for a considerable period of time. True, the writing style might be a bit too cheesy and the plot all too familiar, but one thing I like about this author is the amount of research that goes into writing his books and the vivid descriptions of the surrounding environment that manage to engage the reader throughout the story.

The latest adventure of Robert Langdon takes place in Florence, the capital of the region of Tuscany and the birthplace of Renaissance. As I was reading about Langdon’s street chase from the Italian authorities in the narrow streets of Florence, this picture came to mind from my recent trip to Florence. The city can get overly crowded in mid-summer, but in my attempt to avoid the crowds and find some shade, I veered away from the tourist areas only to find myself alone in these picturesque side-streets.

Happy New Year everyone! Wish you a healthy and prosperous 2014!

Got back last week from a short 5-day holiday in Thessaloniki, where I have to admit I didn’t get much of a chance to go out and photograph. My sole attempt was on the eve of my departure, when the family decided to go on a day-trip to the Edessa waterfalls – approximately a one hour drive west of Thessaloniki. From a weather perspective and by contrast to the rest of my stay in Greece, I have to admit that we chose to do so on perhaps the worst possible day.

For anyone who’s been there, the best vantage point for a photograph of the falls is from all the way down looking up, which meant that we had to drive off a long beaten path to get there. When we arrived, the only accessible place where I could actually set up my tripod and camera, was very near the falls which meant that both myself and the equipment were being hammered by a ridiculous amount of mist – so much in fact, that after every shot I took, I had to wipe down my camera lens and filters. Not the best conditions to take this shot, but this was the best I could do given the weather that day and the fact that I had to drag a hungry bunch with me (aka my entire family) while overdue for lunch by a couple of hours. Special thanks to my cousin and gear caddy Simos, who was patient enough to help me set up!

As for the picture, not my best work to be honest. Shooting with a very small aperture (to slow down the shutter speed and capture the movement of the water), also meant that even the slightest drop from the mist would show up on the image, which meant significant loss of sharpness and more work for me in post-production. 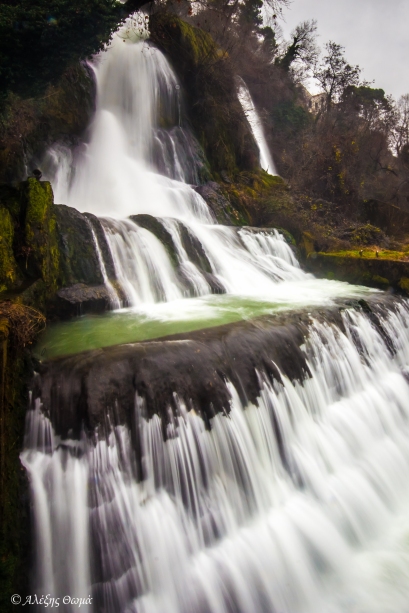