The media now speculate that we are closer to a solution of the Cyprus problem than we’ve ever been before. I may not necessarily agree, but I can’t help but wonder how our lives would change if the island is reunified – both Greek-Cypriots and Turkish-Cypriots living together in harmony. Being a post-war child, I have never experienced what that was once like. In fact, from childhood leading into my army years, I was taught to hate Turks and everything they stood for. It is clear to me now however, that if there is any hope for reunifying the island, feelings from whatever happened in the past, must be put aside.

For my summer holidays this year, I decided to spend 9 days visiting Constantinople. Istanbul (not commonly known that this is Greek for “Εις την Πόλη”, or “To the City”), is a remarkable city from a historical perspective. Remnants of the Byzantine era and the Greek influence are abundant in the vast majority of the city’s historical landmarks. What really impressed me however, is the church of Hagia Sophia itself, a former Christian patriarchal church, turned into an Islamic mosque and now a museum visited by over 3 million people every year. Looking around from the inside, one can’t help but notice the various Christian and Islamic religious symbols all blended together. The Christian mosaics on the walls which are now slowly being restored, standing side-by-side to  the Islamic mihrab and minbar that were later added. That made me wonder whether that was simply an analogy of life in the unified Cyprus that some of us envision. Needless to say, I came back with more questions than I had before.

This is picture of the Blue Mosque as seen from a window on the second floor of Hagia Sophia.

For anyone wondering where this blog’s header image originates from, well here is the entire non-cropped colour picture. This image was taken back in 2008 on Center Island in Toronto. I am fairly fond of this picture, particularly because it was one of the very first (yet decent) pictures I took when I started experimenting with HDR photography. I am usually good at archiving my pictures, but for the life of me I can’t seem to find the original RAW files, so sadly the EXIF data is pretty much gone.

On another note, it seems that I am heading back to Myanmar in a couple of weeks, only this time I am making an effort to do some sightseeing both on the weekend before, and on the weekend after my work week. More specifically, I am planning on visiting Bagan (an ancient city in the Mandalay region of Burma), and Bangkok (on a 2 day layover on my way back home) to take a train tour on the famous bridge of the river Kwai. Admittedly I am pretty excited about the photo opportunities of both these destinations, especially given the fact that my camera has not gotten much use over the last 5-6 weeks. Stay tuned!

Continuing with the series of posts from my recent trip to Myanmar, this is a photograph taken at sunset at Inya Lake near the center of Yangon. Luckily I had taken my tripod with me on the tour bus, on the odd occasion I would need to take a landscape picture in low lighting conditions (very nerdy I know). I guess lugging it around with me sort of paid off with this HDR picture I took of a young couple watching the Ferris Wheel at sunset. 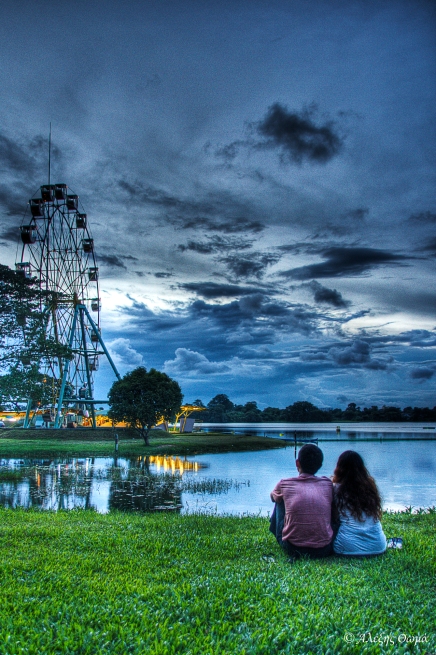 Another rusty truck left abandoned in a field near Kalopanayiotis. Cars in such an advanced state of decomposition make great subjects for photography , and especially HDR photography. What is mind boggling in Cyprus however, is the sheer number of such cars that are simply dumped by their owners wherever they feel like, rather than being taken in for recycling.

PS: I will be away on a business trip for the next two weeks and most likely unable to post on my blog. What I can say however, is that I have really high expectations from this trip photography-wise…stay tuned! 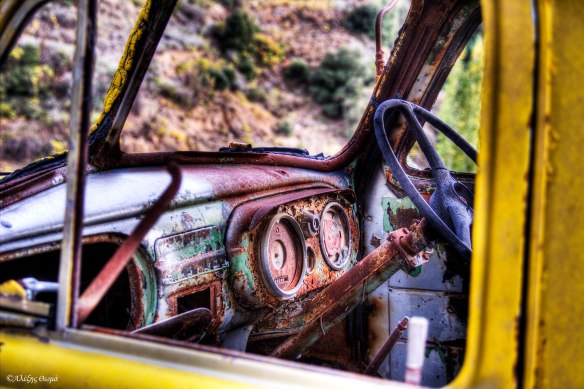 What better way for 3 guys to spend a weekend than head out to the Okanagan Valley for some wine tasting and camping out in the woods! The scenery in that area is truly breathtaking. Looking back, one of the great things I miss about Canada is the nature in British Columbia – it really is second to none.

This picture was taken somewhere near the town of Merritt. I remember we were driving around to find a campsite and came across this view. I yelled at my brother to stop the car, I jumped out with my camera and took a quick snap of the lake.

For anyone wondering – no it didn’t rain that night! Somehow we got really lucky!

Last summer I had the opportunity to visit Saint Petersburg, Russia. A few months prior to my visit, I got a chance to also travel to Moscow and based on that experience my expectations were somewhat reserved. Don’t get me wrong – Moscow is a great city with lots of historical sights, museums and a great nightlife, but its shear size, traffic and pollution don’t rank the city in my top ten list of so-called “exotic” destinations.

Upon arriving in Saint Petersburg I was pleasantly surprised. A beautiful city, full of parks, canals and bridges (342 to be exact!) – it truly lives up to its name as being the “Venice of the North”. Its position, so far north of the equator, means that roughly between the end of June and early July you experience the so-called “White Nights” where the sun does not descend enough for the sky to go dark. Unfortunately, I got there in August but even then, the sun would only set at roughly around 11pm.

This is a picture of the Church of the Savior on Blood – one of the many city landmarks. The picture was taken from one of the nearby bridges at around midnight. 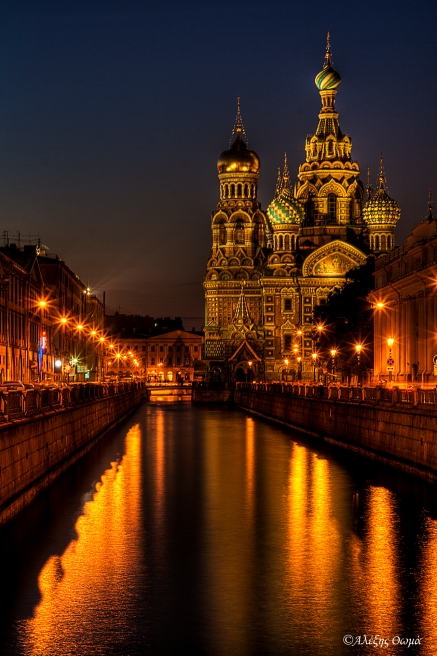 This is a picture of an old Ford bus which has been left abandoned for years now on the side of a street in the village of Kalopanayiotis. As a kid I used to spend weeks at a time in the summer with my grandparents at our cottage in Kalopanayiotis. In fact on numerous occasions I had to take this type of bus (if not this actual one) to and from Nicosia. It definitely brings back old memories so every time I walked by it, I always felt that I had to return one day with my camera for a capture.

Rusty cars in general are best captured in HDR as the technique highly exaggerates the texture and creates somewhat of a surreal look which was what I was aiming for. It also worked really well with the texture of the tarmac, which I used as a leading line in my composition.

Back in September 2008, myself and a few friends decided to take a flight from Toronto and spend the long weekend in Chicago. This was the view from the balcony of the condo that we had rented.

This past December, Daria and I spent a weekend in Drousha, near the Akamas Peninsula on the western part of the island. Being so close to Latsi, we decided to head there on Sunday for some fresh fish. After stuffing ourselves with large quantities of food, we decided to take a stroll around the area, when I luckily stumbled upon a bunch of surfboards on the beach side.

This is a High Dynamic Range (HDR) picture, which is essentially a composite of 3 separate pictures taken at different exposure levels (normal, underexposed, overexposed) and then merged in post-production. I used this technique to exaggerate the boldness of the clouds without sacrificing the detail of my subject. In my mind, I was trying to produce a single image emphasizing the contrast between summer and winter.

I was in Limassol this past February for the carnival celebrations. I visit Limassol fairly often, but this time around I decided to take my camera with me to capture some of the beautiful sunsets by the beach. While walking down the beach side, I noticed this pier extending into the water. Luckily, there were only a few people on the pier at the far end, exactly where I wanted them to be. I quickly set up my tripod and bracketed 3 shots to create this HDR. I chose to create an HDR so that I could emphasize the boldness of the clouds as well as the texture of the wooden walkway.

Shot with my Canon 60D, at F16 bracketed at -2/0/+2. HDR processed in Photomatix with some minor contrast adjustments and sharpening in Photoshop. 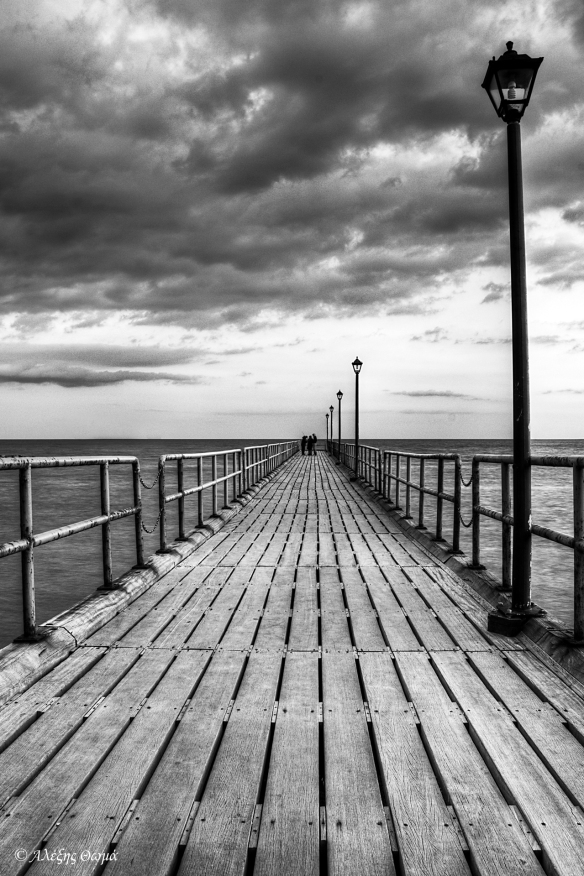